Early morning of April 24, 2012, the activities for Talibon’s Barangay Official’s Congress 2012 started rolling with a Eucharistic Mass at 6:30 a.m. at the Blessed Trinity Cathedral with Rev. Fr. Jonas Achacoso officiating. It was an apt and fitting gesture of thanksgiving for a beautiful day wherein all barangay officials convened and received due recognition for the implementation of laudable developmental projects in their respective barangays. 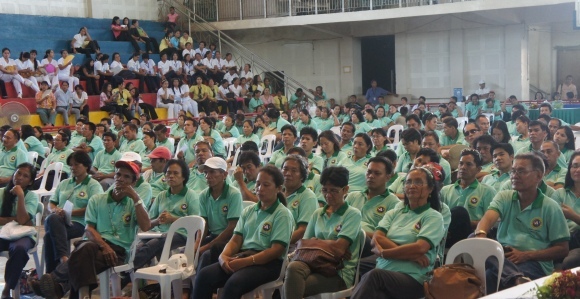 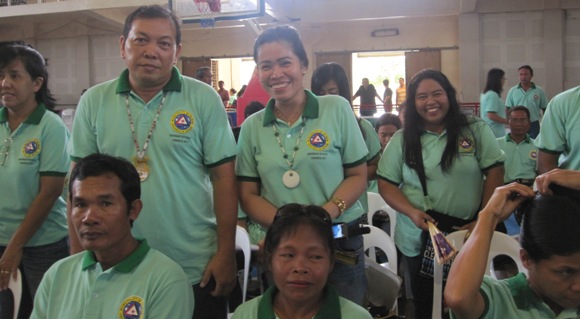 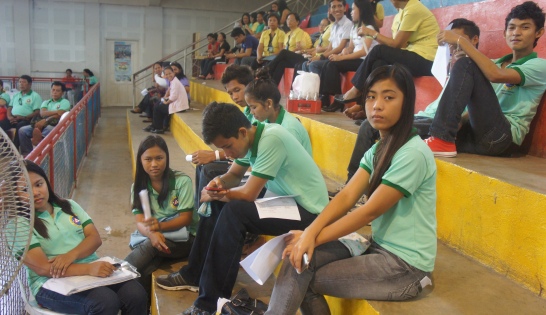 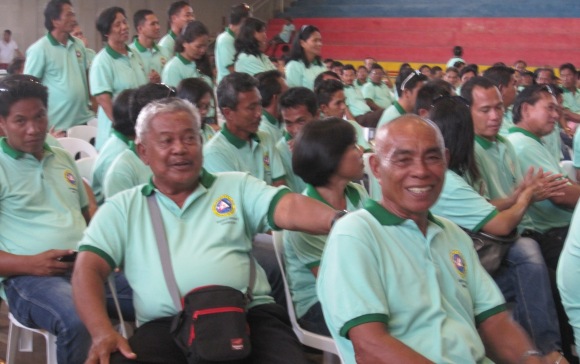 It was also a day for the Executive and Legislative Reports of the Mayor, Hon. Restituto B. Auxtero and Vice-Mayor Marcos Q. Aurestila; the day they have been looking forward to and prepared for in order to let the people know of their accomplishments since they took office in 2010. 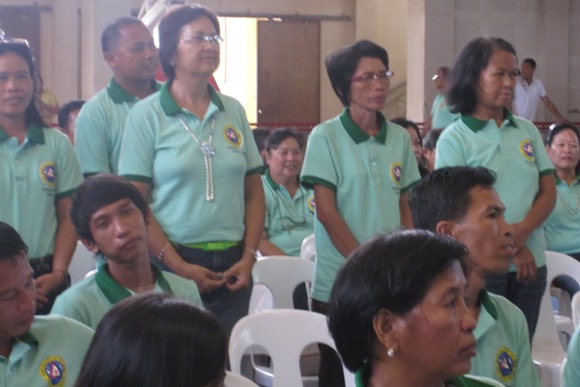 Excited and looking forward to a whole day affair at the CPG Multi-Purpose Center, the barangay officials and LGU personnel, assigned to help facilitate the occasion, convened at the center for registration. 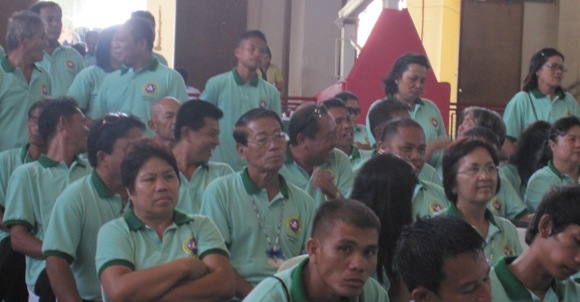 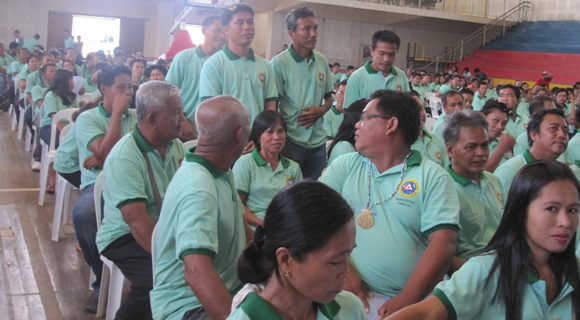 All barangay officials were readily identifiable with their green polo shirts which were also worn by the Mayor and the DILG officer in-charged of the affair. Support personnel from the LGU were in purple polo shirts. 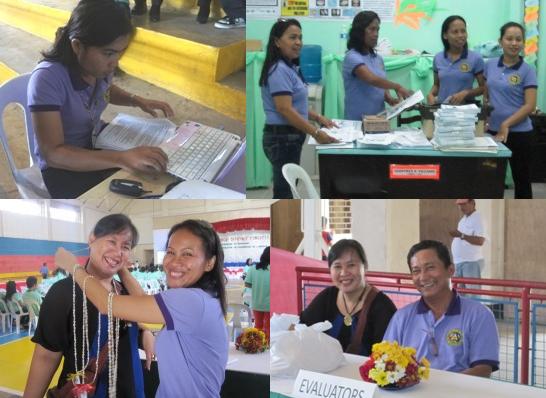 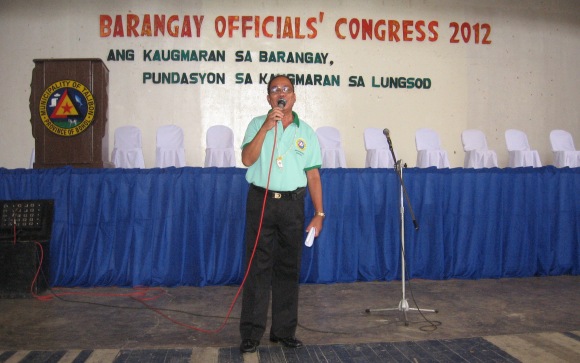 The program proper begun with the Invocation (led by Mr. Apolinario E. Artiaga, Executive Assistant to the Mayor) and the playing of the National Anthem and the Bohol Hymn by the Municipal Band. Hon. Dominador A. Salmeron (ABC President) gave the Welcome Address and made a roll call of all barangay officials present. 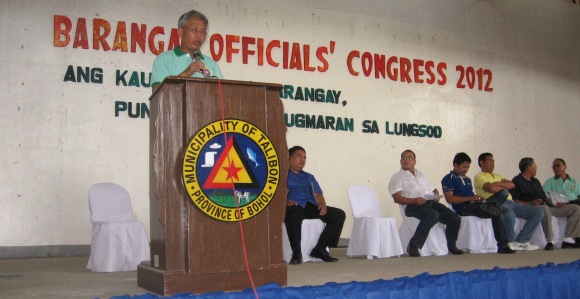 The message of the Municipal Mayor, that followed, touched on when the Barangay Officials’ Congress was established (Municipal Ordinance 2009-06), and the creation of the Municipal Team for Barangay Evaluation and announced that awards will be given to the outstanding barangays in pre-agreed criteria’s and thus all were exhorted to stay until the end of the program.

The Statement of Purpose or overview of the activities lined up for the day was then given by Mrs. Maura P.M. Justol, the Municipal Local Government Operations Officer. The Barangay Officials’ Congress 2012 theme is “Ang Kaugmaran Sa Barangay, Pundasyon sa Kaugmaran sa Lungsod” (Barangay Development is the Foundation of Sustainable Progress). 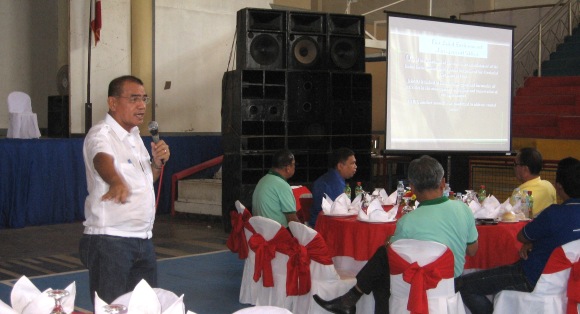 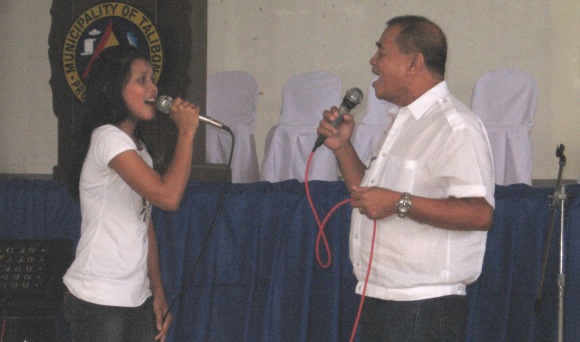 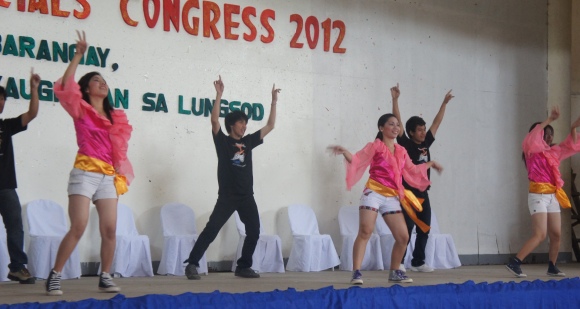 A certificate of appreciation was given to Atty. Cajes for taking the time, in spite of a hectic schedule, to share with the populace the CLEC II policies and updates.

An hour before the scheduled lunch at 12 noon, the Legislative Report was taken up and expounded by the SB Secretary, Camilo N. Garcia in the absence of the Vice Mayor Marcos Q. Aurestila. 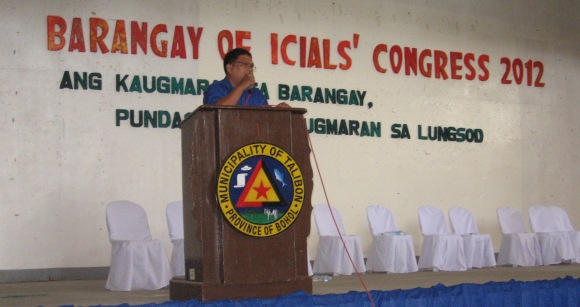 First, the Sangguniang Bayan Members were introduced and the different committees that they oversee were stated. Ordinances and resolutions made from July 2010 up to the present were then presented to the crowd. The Municipal Library, which is under the Sangguniang Bayan, also announced the availability of free online data, not available in the local library, wherein researchers can access the files of the National Library thru www.elib.gov.ph. 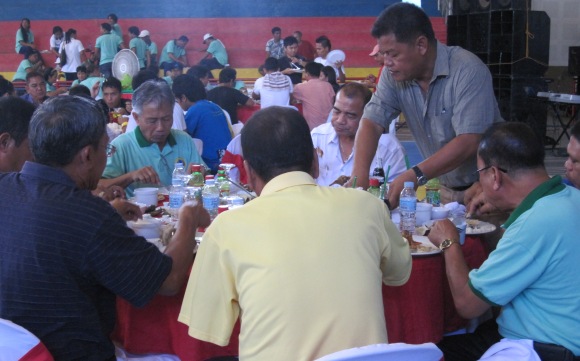 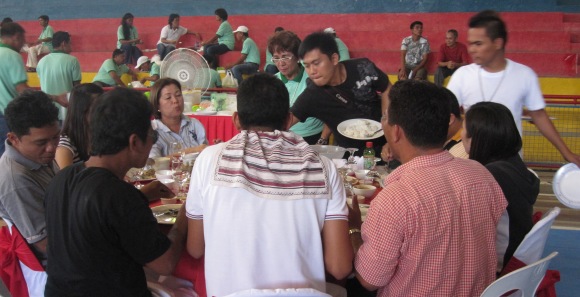 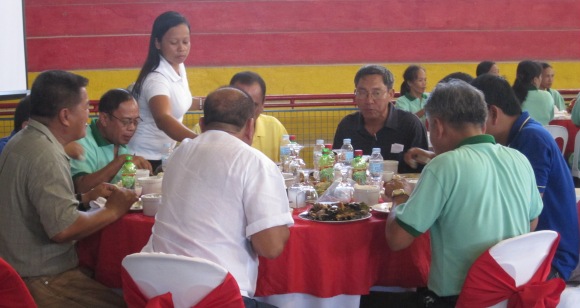 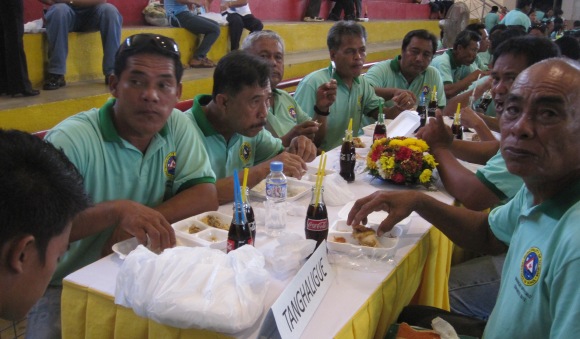 Board Members, 2nd District of Bohol

Noted was the arrival of Hon. Josephine Socorro C. Jumamoy and Hon. Romulo G. Cepedoza, both Board Members of the 2nd District of Bohol. After they have partaken their lunch, Hon. Cepedoza was called upon to give his message followed by Hon. Jumamoy. 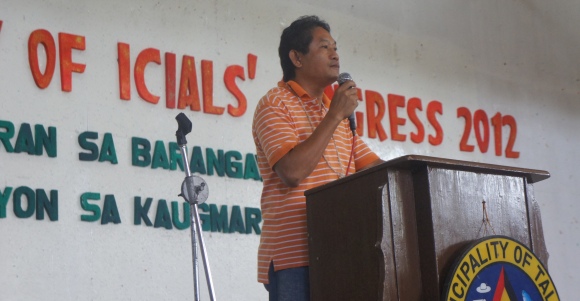 Both congratulated Talibon, and especially the Municipal Mayor, for giving venue to the Barangay Official’s Congress; for its establishment; for giving attention and concerting all efforts to the development of the town first thru the barangay level by implementing programs to this effect.

Mrs. Jumamoy specifically stressed the point that all barangay officials, in fact all government officials and employees have a mission in life to serve the constituents of the municipality. She exhorted everybody present to concentrate all efforts and aim to overcome obstacles and hardships and do their utmost to uplift the living conditions of the general public.

ith the party was Mr. Jonathan Mabia, the representative of Hon. Gerardo C. Garcia. Mr. Mabia, a former Barangay Captain of Mahanay, was called upon to give a short message. He conveyed the regrets of Hon. Garcia for not being able to attend the Congress due to a previous commitment. 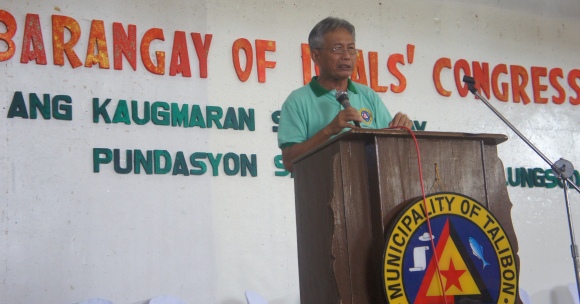 With a power point presentation, the Chief Executive Officer of Talibon, Municipal Mayor Restituto B. Auxtero, presented to the barangay officials and attending LGU employees, his accomplishments from the moment he took the seat as the Mayor of Talibon up to the present; also touching on some of the on-going projects and well as future plans for the development of Talibon. 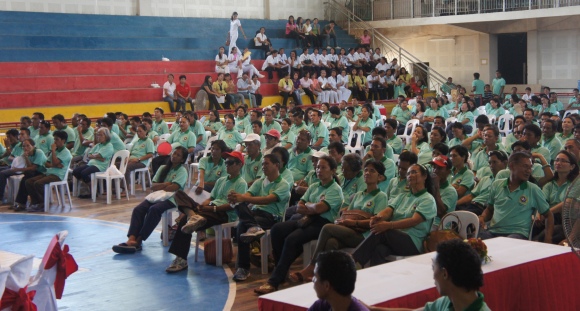 Although given a limited time to give his report, the presentation was precise and clear confirming to all his promise of good governance and transparency during his incumbency.

Mrs. Regina G. Bastes, DILG-Bohol Admin Officer, was called upon to discuss RA 6713. This serves as a reminder of the public accountability of all local government officials and employees; that public office is a public trust; that public officers and employees must at all times be accountable to the people, serve them with utmost responsibility, integrity, loyalty, and efficiency, act with patriotism and justice, and lead modest lives. All were reminded that they are “servants” and not “masters” of the people in their locality.

Mrs. Bastes was handed a Certificate of Appreciation for her contribution to the Barangay Officials’ Congress by sharing her expertise on RA 6713 and related topics on servanthood.

Noted was the arrival at past 3 p.m. of the Governor of Bohol, Hon. Edgar M. Chatto, accompanied with his wife, Madame Pureza and party; specifically that of the presence of Mr. Anthony Damalerio and Mr. Eric Galan, both assigned at the Local Government Affairs Office. They came straight from the 11th Heat Caravan held at the Municipality of Lila.

Even pressed by time constraints, the Governor deemed it best to meet with the Barangay Officials of Talibon. With a short message, he encouraged the Barangay Officials saying that “ang barangay maoy gamut sa lungsod sa katilingban” (the barangay is the root of the community or town) and thus uphold the affairs’ theme of “Ang Kaugmaran Sa Barangay, Pundasyon sa Kaugmaran sa Lungsod” (Barangay Development is the Foundation of Sustainable Progress). 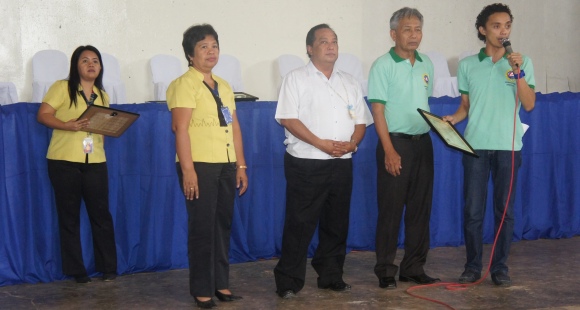 The Governor called for the local officials and employees to serve and reach out to the lowest level of society and this is only possible with proper communication. He is quoted to say that “Communication is an important tool in Leadership”. He shared his dream of eradicating or aim for a zero “0” malnutrition rate in the whole province of Bohol.

Awarding of Plaques and Prizes 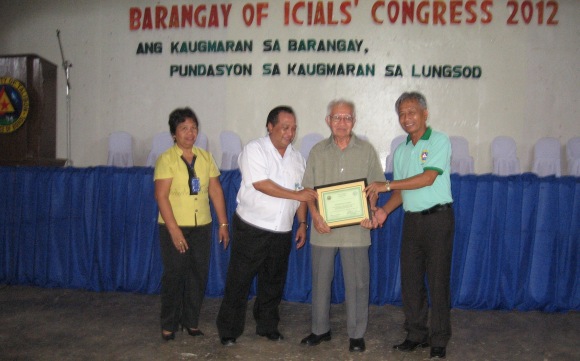 The Congressman of the 2nd District of Bohol

Hon. Erico B. Aumentado was welcomed by the people thru Mr. Jett Boyles, the Master of Ceremony. He is the Congressman for the 2nd District of Bohol. His presence, although arriving a bit late at exactly 4:43 P.M. due to a hectic schedule and previous commitments, is a boon to the Talibongnons for his avid and continuous support of all the major projects that the Municipality of Talibon have undertaken and will be implementing in the near future.

When the Congressman was seated, the awarding of plaques, certificates and cash rewards continued. Those who received plaques and cash awards of P10,000.00 each were Barangays Balintawak (Best in Solid Waste Management), Balintawak (Best in Health & Sanitation, Magsaysay (Best in Backyard Gardening & Agricultural Development), Purok 7 of San Roque (Most Outstanding Purok). Barangay Santo Niño was lauded as the Most Outstanding Barangay of 2011 and was awarded with a plaque and a cash award of P15,000.00. 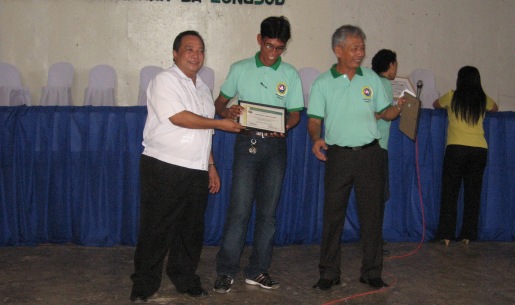 Another special award was given to the Municipal Health Unit for their exemplary achievement in maintaining the Nutrition Honor Maintenance Award. This award was given by Mayor Auxtero thru the Administrator, Mr. Pio E. Sayson, the Chairman of the PRAISE Committee.

But the most unexpected awards were those given to Mr. Vergel Zarel E. Boyles and Ms. Mona Liza Cruda for their exemplary performance and contribution to the activities, not only of the Congress but beforehand. They have constantly been called upon to help set up the different activities that the Municipality of Talibon entered into and they answered all calls with dedication and gusto even when the said activities where beyond their designated tasks. They both received certificates of recognition and cash prizes of P5,000.00 each accompanied with a promise of a step increment in their salaries effective May 1, 2012. 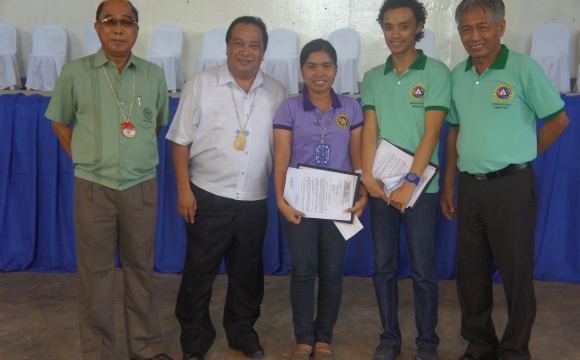 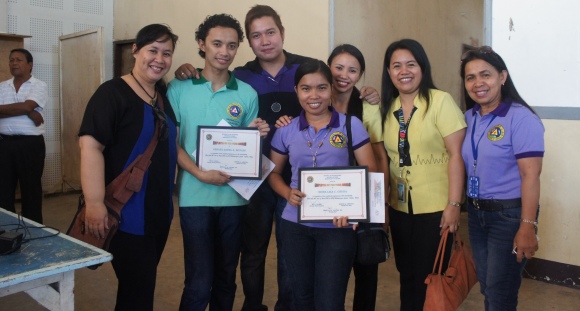 Before the people dispersed and the Congress adjourned, the Hon. Erico Aumentado was called upon to give his special message to all. He lauded and encouraged Mayor Auxtero and the LGU officials on their move to make a Master Plan of the development of Talibon especially that of working first on the barangay level and going up to the Municipal level (a bottom-up strategy). 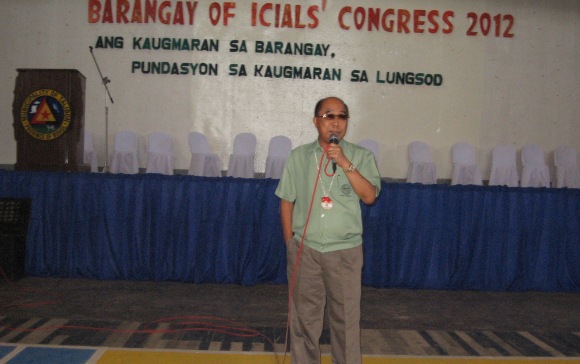 His loud cry at the end of his message resounded in all ears: MABUHAY TALIBON!!!