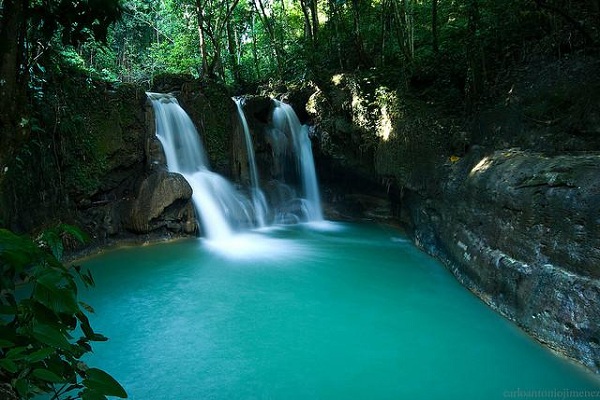 The Mag-aso Falls in Antequera is 20 km from Tagbilaran. The fall drops 10 m with lush vegetation around it. Antequera also offers a wide display of all kinds of baskets at the market area on Sundays.

The Mag-aso Falls is one of Bohol’s natural treasures. With a height of 25 feet, the twin falls is picturesque against a backdrop of tall trees, wild plants including giant ferns, and deep ravines. Once on the site, while bathing and surrounded by the natural landscape, one feels immersed in a middle of a jungle with the sound of the interminable chirping of the birds and the rush of flowing waters playing music to your ears. The falls can be found in barangay Mag-aso.

Click here Now for great Bohol Deals available today!
Search for Hotel and Tour Packages! For a limited time only! 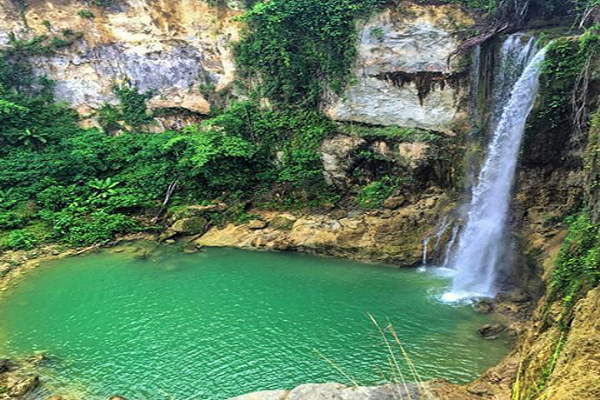 The Camugao Falls in San Isidro, Balilihan is another attraction and passable only by a motorcycle. You will pass by rugged cliffs and ravines as you trek down the falls. 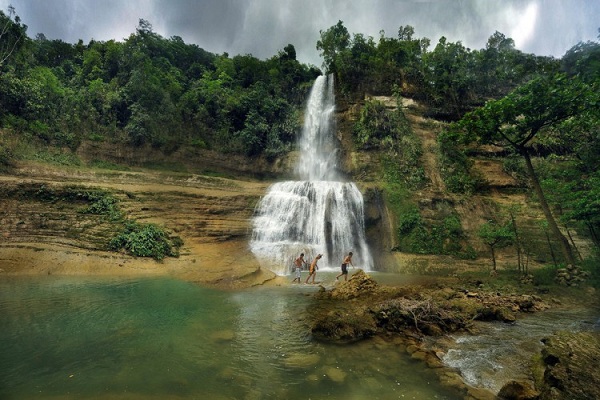 Can-umantad Falls s the most beautiful falls that I have ever seen in Bohol. It looks so majestic! From far off, you will see the falls as one high drop but upon closer look, the falls is in fact in three layers although the 3rd layer is further off and shorter. 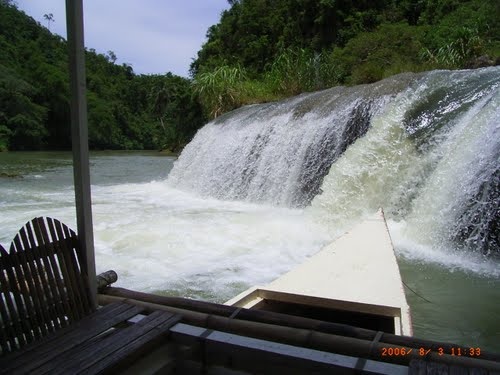 Tontonan Falls in Loboc is 21 km from Tagbilaran City and generates’ the NPC Hydroelectric Plant which supplies electric power to six municipalities. The Plant is located in a deep tunnel a few meters from the Loboc River. The Tontonan Falls about 15 m in two stages at the base of a tropical forest valley. 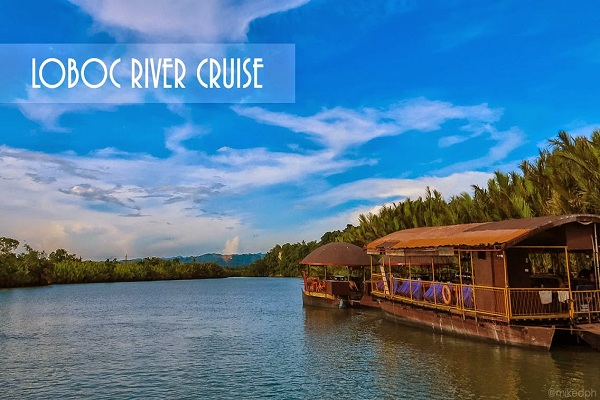 Loboc river cruise is just 21 km from Tagbilaran City - enjoy a ride on board boat restaurants. The trip starts at the Loay Bridge and ends near the Busay Falls, a bathing spot.

BUSAY FALLS in Sevilla is 34 km from Tagbilaran City and located inland of the Loboc River past Sevilla town. Two little islets in the middle of the river make the place an ideal site for a picnic. 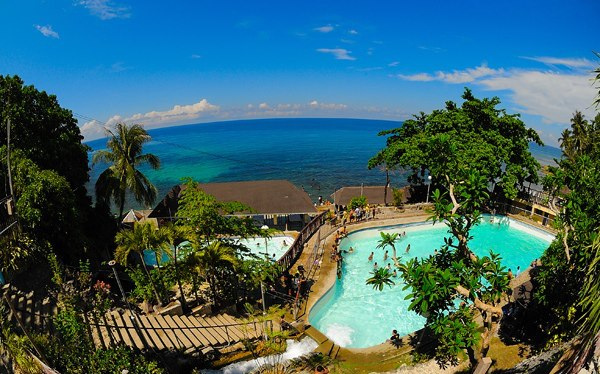 Badiang Spring in Valencia is 44 km from Tagbilaran City. An underground freshwater spring gushes from twin pipes near the sea. The springwater is diverted to fill 2 swimming pools, one large and the other for children. Sheltered picnic tables are on a veranda overlooking a smooth-stone beach.

Badiang Spring is an underground freshwater spring that gushes forth over a cliff only a few meters high forming an attractive waterfall. The water is icy cold and flows directly to the sea which is only a few steps away.

The area where the spring is located is scenic. The top of the cliff is full of trees and from there you look towards the mesmerizing blue expanse of the sea. Under and on the sides are rugged cliffs with intermittent tall coconut palm trees, old talisay trees, and other tropical foliage. 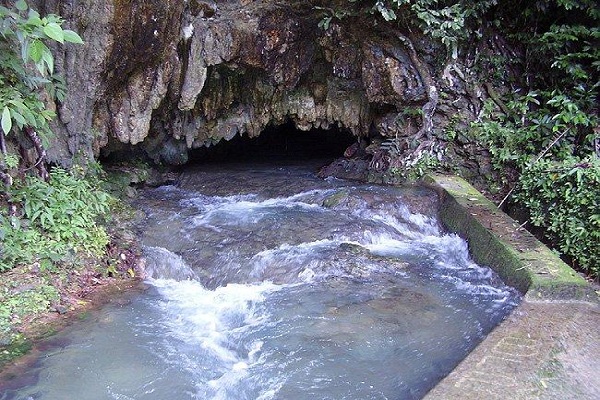 Inambacan Falls in Antiquera is 19 km from Tagbilaran City with cascading waterfalls in a forest setting. It is one kilometer away from the Poblacion. The Inambacan Falls is another beautiful cascading waterfall also in a forest setting. Its estimated output is about 8,000 gallons per minute which all drain to the Abatan River. Only one kilometer from the Poblacion of Antequera, the falls is a potential source of water supply for drinking and irrigation. 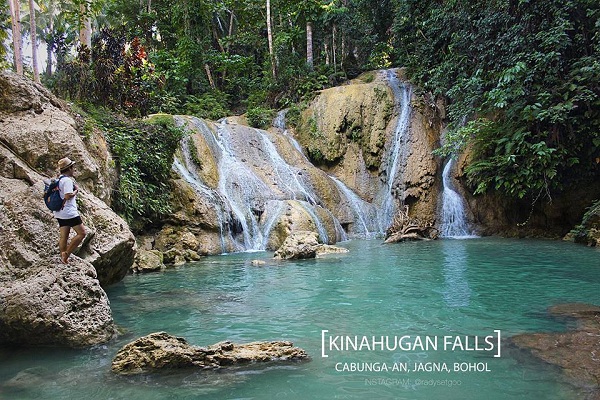 The Kinahugan Falls is composed of three (3) falls: one in the center, one at its northern side and another at its southern side. The water falls over a cliff 50 feet high which is covered with moss having a green backdrop of tropical trees and shrubs. The three falls are beautiful beyond words. The strong flow of water from the widest and biggest falls has carved out a basin below it which is about 15 feet deep and 60 feet in diameter.

Situated on a hill at Karap-agan, the falls is only a kilometre away from Cabungaan Elementary School. But from the Poblacion, the falls is approximately 5 kilometers away and takes about an hour and a half of leisure walking to reach it.

The Boctol Waterfall is located at Barangay Boctol. It is a beautiful falls with waters cascading over a very steep cliff with a deep basin below. The basin or natural pool reflects the blue hue of the sky above it. A cave-like aperture is at the side of the cliff near the basin with the water falling at one side of it. The opening may lead to a subterranean channel carved out by the flowing waters. 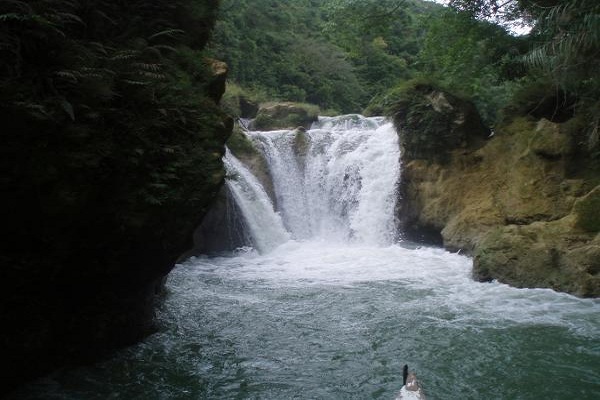 The Busay Falls is 12 meters wide and four meters deep, though at a distance it looks much smaller. The river cruise usually ends at the falls where the boats tarry a little bit to allow the visitors to appreciate the green scenery or to enjoy a short dip near the falls. The falls is a favorite bathing place for the local folks.

Logarita Swimming Pool is located at Bilar town inside the Rajah Sikatuna National Park. The pool is fed by the Logarita Spring which is known for its fresh, clean and cool water. The water at the often moss-covered pool is safe for drinking and far healthier for it is without chemicals. The moss does not make it dirty but instead provides oxygen to the water which is refreshingly cool. 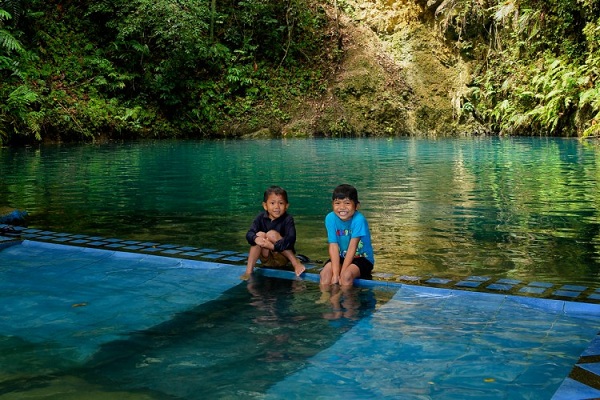 The Can-umantad Trail trek starts at Canawa Spring in Barangay Can-umantad. The Canawa Spring is another natural wonder; a spring with an underground source since no water source feeds it from the outside. Trekkers can stop and enjoy a short dip in the pool of the bluest blue before proceeding further inland. 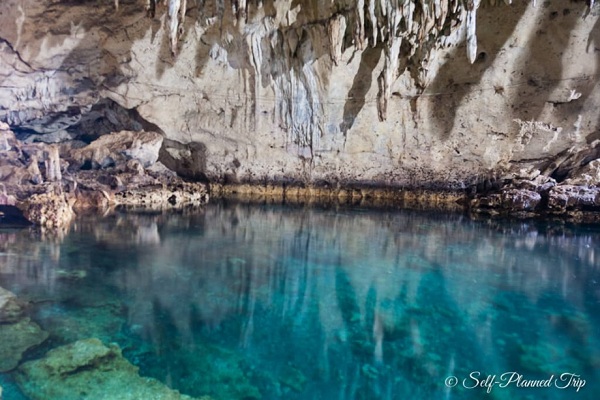 The Hinagdanan Cave, also in Panglao, has a natural underground swimming pool of very cool spring water. It would be a thrill diving into chilly waters under overhanging stalagmites and stalactites.

Panglao island has no river or lakes yet the inhabitants have, as its water source, the freshwater spring inside the Hinagdanan Cave and also the “miraculous” spring found inside the church at Dauis. 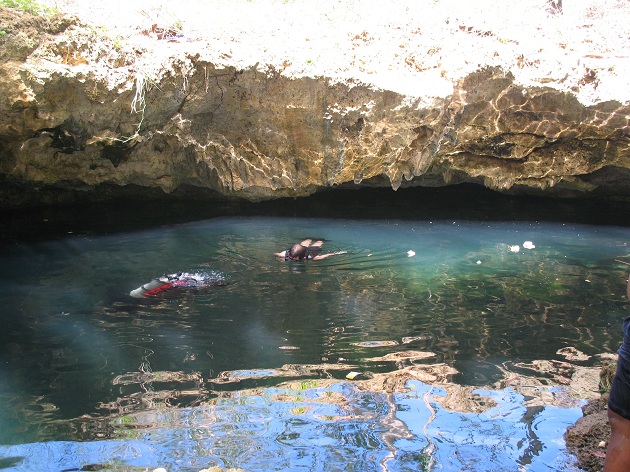 Tigdao Spring/Cave can be found in Anda town. A karst limestone cavern holds fresh spring water which is only a few inches from the rim. Spelunkers have explored the inner recesses of the cave and found no major tunnels. Tigdao Spring looks like a big natural well. 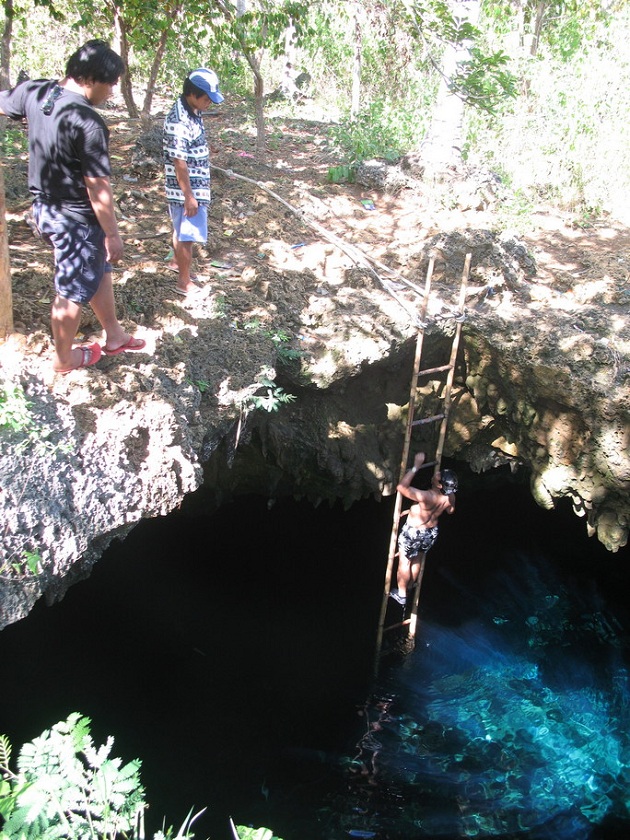 Banilad Spring/Cave also in Anda was once a major religious pilgrimage site. The cave is situated near some ruins which are almost covered by vegetation. Stone steps lead to the cave opening. Inside is a cavern with a tunnel that appears very constricted. 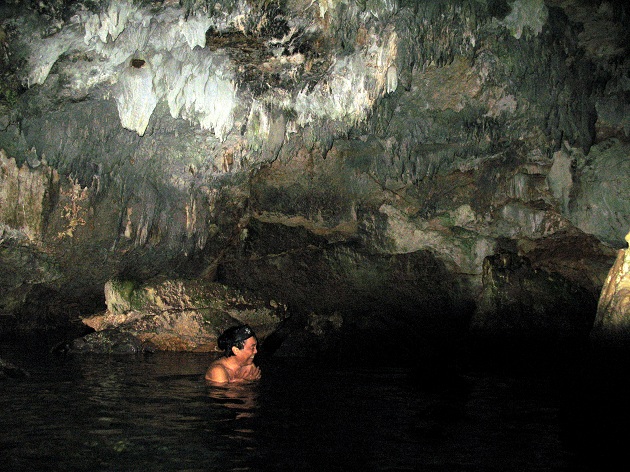 Kalorenzo Spring/Cave in Anda is a typical karst cave with a wide opening and a spring water pool below it. The cavern inside is wide and spacious with typical formation of stalactites and stalagmites with the water up to the chest only. A tunnel which is only a few meters long can be found inside. Further entry to the tunnel is restricted due to localized constriction fringed by unstable-looking karst formation.

Wahig-Pamacsalan Dam is located in Bilar town, 41 kilometers from Tagbilaran City. The dam, with its wide spread of contained water is good for boating and sports fishing. The green rolling scenery that helps to contain the water is a good and refreshing backdrop for these sports. Boating and sports fishing are activities that help one to commune with nature and reinvigorate tired spirits.

Ardent Hot Spring is one of Camiguin’s hot springs and the most popular. The first time I visited the place, it was a natural pool with the waters truly hot especially at the shallowest point. The pool was surrounded by a rugged terrain with thick vegetation. The road leading to it was a dirt road with potholes. Rain, which falls more often than not, aggravated the situation.