Napoleón Isabelo Veloso-Abueva (born January 26, 1930), more popularly known as Napoleón Abueva, is a Filipino artist. He is a sculptor given the distinction as the Philippines' National Artist for Sculpture. He is also entitled as the "Father of Modern Philippine Sculpture". He is the first and only Boholano given the distinction as National Artist of the Philippines in the field of Visual Arts.

The Abueva's house is located near the Municipal Hall of Duero. It can be seen along the highway. 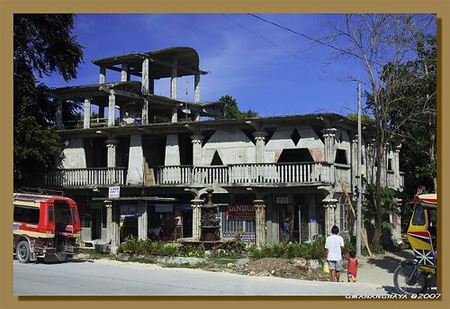 The building beside the highway is the one he designed when he and his siblings were planning to set up a bank. His house is further down from the road, just by the beach. It's like a ship inside.

National Artist Napoleon Abueva was born on Jan. 26, 1930 in Bohol.

The sculptor -- whose works include the double crucifix inside the Parish of the Holy Sacrifice at the University of the Philippines in Diliman, Quezon City, and the Transfiguration, a towering Christ figure at the Eternal Gardens Memorial Park in Caloocan City -- studied at the UP School of Fine Arts under Guillermo Tolentino.

Napoleon Abueva, nicknamed Billy, was born on January 26, 1930 in Tagbilaran, Bohol to Teodoro Abueva, a Bohol congressman and Purificacion (Nena) Veloso, president of the Women’s Auxiliary Service. His father was a friend and contemporary of former Philippine President Manuel Roxas and Ambassador Narciso Ramos. He was a member of the Provincial Board, and later became the Provincial Governor of Bohol. He ended his career as a Congressman in 1934. Both of Abueva's parents died serving their country. 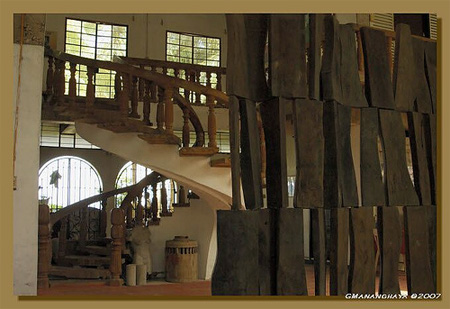 Abueva has six other brothers and sisters: Teodoro (Teddy), Jr., now based in New York, USA; Purificacion (Neny -deceased), married to Atty. Ramon Binamira (dec.) of Tagbilaran City; Jose Abueva (Pepe), former president of the University of the Philippines; Amelia Martinez (Inday), now living in Chicago; Teresita (Ching)Floro, now living in Sydney, Australia; and Antonio (Tony), a landscape artist who met a tragic fate aboard Princess of the Orient; his body has not been found.

At U.P, one of his mentors was Guillermo Tolentino, also a national artist, who created the oblation at the university entrance. Abueva has helped shape the local sculpture scene in the Philippines. Being adept in both academic representational style and modern abstract, he has utilized almost all kinds of materials from hard wood (molave, acacia, langka wood, ipil, kamagong, palm wood and bamboo) to adobe, metal, stainless steel, cement, marble, bronze, iron, alabaster, coral and brass.

In 1976, he was awarded the status of National Artist of the Philippines by then President Ferdinand Marcos. He was the youngest recipient of the title at age 46.

Abueva also performed the death mask procedure of the late Fernando Poe Jr. in 2004, as well as that of Ninoy Aquino in 1986. Both masks are now displayed at the Center for Kapampangan Studies, Hacienda Luisita, Tarlac. Incidentally, he also made a death mask of Cardinal Sin.

He is married to Cherry Abueva, a psychiatrist, and has three children, Amihan,Mulawin, and Duero.